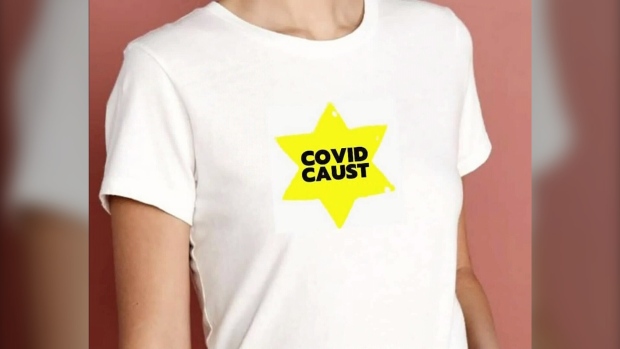 VANCOUVER — Members of Vancouver’s Jewish community are reacting to a t-shirt created by a local woman comparing the COVID-19 vaccine rollout to the Holocaust.

Susan Standfield is anti-mask and anti-vaccination. Her Instagram account features numerous videos and photos of her taking part in “Freedom Rallies” in Vancouver and criticizing provincial and federal governments for implementing COVID-19 restrictions.

She’s created a range of t-shirts with messages like “Real men don’t wear masks” and “Immune by nature.”

Her most recent design – a yellow star with the words “COVID Caust” – is causing offence in the Jewish community.

During the Holocaust, the yellow star was used to identify Jewish people, intended to humiliate them and to mark them out for segregation and discrimination. The policy also made it easier for the Nazi regime to identify Jews and send them to concentration and death camps.

In her most recent video, posted Saturday morning, Stanfield says she used the design to show she is being persecuted for her views – views health officials say are false and dangerous to public health.

“We are the official yellow star class in Canada, so that’s why I made that design,” she says in the video. “People like me that have my values and live my life and say, ‘Well I don’t have to wear a mask and I’m not being vaccinated and I have liberty and democracy,’ we are systematically being targeted.”

Standfield also equates the COVID-19 vaccine rollout to the Holocaust, falsely accusing health officials of knowingly giving people injections that are killing them.

“So the first people getting the vax, who are they? Old, disabled and Indigenous. I mean, do the math on that,” she says.

Dr. Michael Elterman is a member of Vancouver’s Jewish community. He was also the chair of the former Canadian Jewish Congress.

“My first reaction was that it’s irrational, because the whole idea of a vaccine is to save people’s lives and yet this person seems to be associating this logo with the Holocuast, with the genocide of a people,” he said in an interview with CTV News. “It’s irrational, it makes no sense.”

He says the use of the yellow star in this way is offensive.

“They (Standfield) are including probably one of the most horrific pieces of Jewish history,” he said. “It’s a time in our history when we were identified for genocide, it was a hurtful time.”

“B’nai Brith condemns, in the strongest terms, this trafficking in Holocaust imagery in order to promote COVID-19 conspiracy theories,” Mostyn said in an email. “There can be no comparison between masks and vaccines, which are intended to save lives, and the cruel murder of six million Jews and millions of others by the Nazis and their collaborators.”

CTV News reached out to Standfield asking if she thought her shirts were offensive. In an email she responded in part, “my design is an act of solidarity among all persecuted people.”

Elterman says he would like Standfield to remove the shirts, but acknowledges, “she has a right to be wrong.”