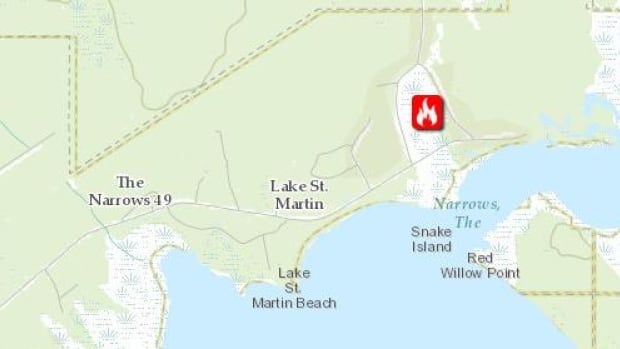 A Manitoba First Nation is evacuating its residents due a wildfire burning nearby.

A wildfire has been burning near Lake St. Martin First Nation, a reserve just over 225 kilometres northwest of Winnipeg in the rural municipality of Grahamdale, for a week. It has burned about 1,100 hectares — or just nearly 2,720 acres — in that time, according to Manitoba’s wildfire map.

Around 9 p.m. Wednesday, the First Nation announced via Facebook that it will be evacuating elders, infants and those with chronic medical conditions from the community because of the fire.

Around 10 p.m., the band activated its emergency response through the Canadian Red Cross, it said on Facebook.

Anyone leaving the community needs to bring necessities for their families, such as clothing and medication. The Red Cross will be working to get people into hotel rooms, the post said.

Members living on-reserve are to meet at a hotel in Winnipeg, where members of the Red Cross will help them and assign them to a hotel room, the post said.

In the mean time, any band members living on the First Nation who have a license to drive a school bus is asked to get to the Lake St. Martin First Nation band office as soon as they can.