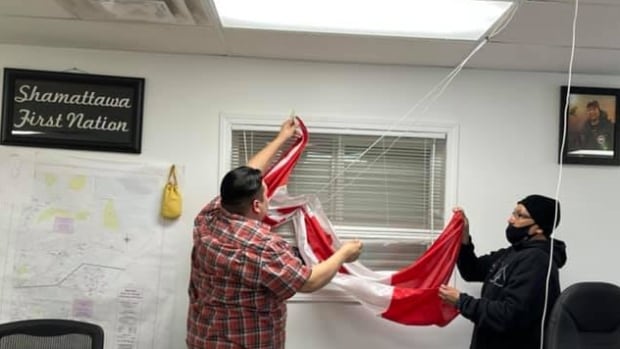 The discovery of 751 unmarked graves near the site of a former Saskatchewan residential school this week prompted a Manitoba chief to pull down Canadian flags in Shamattawa First Nation.

“What has occurred is a genocide and the Liberal government doesn’t see it that way, so this year we’ve decided to cancel Canada Day,” Shamattawa First Nation Chief Eric Redhead said.

“It’s going to be a sombre day, a day of remembrance, a day of reflection and a call to action.”

Redhead planned to release an official letter notifying community members Friday that no celebrations would take place on July 1. Instead of wearing red, Shamattawa residents are encouraged to wear orange in memory of “the little children that never made it home.”

Cowessess First Nation said this week the preliminary finding of an estimated 751 unmarked graves in the community, about 140 kilometres east of Regina. The unmarked graves are at a cemetery near the former Marieval Indian Residential School.

In May, Tk’emlúps te Secwépemc First Nation in B.C. reported unmarked burials near the Kamloops Indian Residential School. Preliminary findings suggest the site contains the remains of about 215 children.

Investigations are underway at similar sites in Manitoba.

The Kamloops finding set off nationwide vigils and events of mourning.

It also prompted calls for government to fund efforts to investigate other residential schools for similar burial sites, as well as pleas to the Catholic Church to take responsibility for its role in running the schools for decades.

“We’ve always celebrated our relationship with the federal government. Through the past years we’ve had Canada Day parades, barbecues, we celebrate the signing of the treaties,” Redhead said.

“But with all that’s going on with discoveries around the country of little babies, children being discovered in unmarked graves … we just thought it’s not a year to celebrate the relationship between Canada and First Nations people.”

‘No country is perfect’

“No country is perfect, absolutely not one on the face of the earth, but Canada is a lot closer than many,” he said.

Manitoba pledged $2.5 million this week for efforts to revisit and search residential schools in the province for possible unmarked burial sites. Pallister said it’s important for the province to take a support role in those efforts, but they should be led by communities and First Nations leaders.

Winnipeg Mayor Brian Bowman urged Winnipeggers to join the city’s Indigenous accord to “convert thoughts and prayers to action in the community where it matters most.”

“As Canadians prepare for Canada Day, I would ask that Canadians and Winnipeggers consider the gift of reconciliation to our country this year,” Bowman said during a council meeting on Thursday.

Coun. Shawn Nason (Transcona) asked the mayor for his views on calls to cancel Canada Day, citing the City of Victoria‘s move to not mark the national holiday.

“This will be, obviously, a decision that Canadians from coast to coast to coast, as well as Winnipeggers, will have to make,” the mayor said.

“One of the things I love most about Canada is that we can wake up every day and work hard to make Canada a stronger country, and I’ll be celebrating that and other things.”

Bowman said Canada has failed to live up to its responsibilities of “peace and partnership” with Indigenous people set out in the treaties.

All Canadian flags that previously hung at government offices in Shamattawa have been taken down. They’ll stay down until the federal government formally recognizes that what transpired through residential schools was an act of genocide, Redhead said.

“Until then, and as long as I am chief, they’re going to remain off our walls and off our flagpoles.”

Support is available for anyone affected by their experience at residential schools, and those who are triggered by the latest reports.

A national Indian Residential School Crisis Line has been set up to provide support for survivors and those affected. People can access emotional and crisis referral services by calling the 24-hour national crisis line: 1-866-925-4419. A Saskatchewan-based line is now available by calling 306-522-7494.