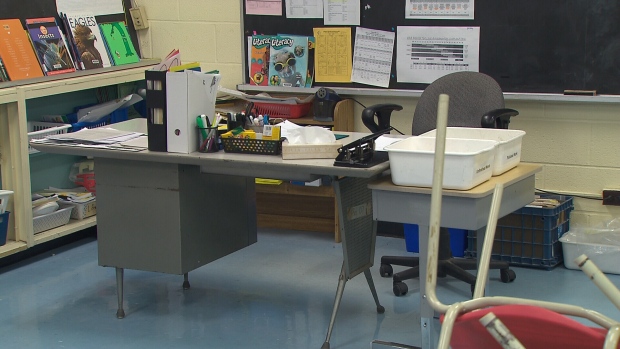 WINNIPEG — Manitoba’s premier said it doesn’t bother him “at all” that teachers pay for school supplies out of their own pockets.

His comments came at a news conference on Wednesday after the province unveiled its 2021 budget, which includes a Teaching Expense Tax Credit.

This tax credit allows K-12 teachers and educators to claim a 15 per cent refund for up to $1,000 spent on school supplies not covered by employers.

When asked if it bothers him that teachers pay for their own supplies, the premier said it does not.

“As a former teacher, as the son of one, as the brother of one, as someone who believes in public education, I’ve watched teachers invest their own money out of their own pocket for decades now,” he said.

“I just think this is a good, fair incentive to encourage other teachers to do the same.”

Pallister added that there is lots of room for initiative and that teachers have shown this initiative throughout the pandemic.

“I just think teachers are people who have inspired me in my life and I think this is just a small way of indicating to teachers, yeah, use your initiative. (If) there’s something you want to purchase to help your students, take a look at doing it.”

Following Wednesday’s budget announcement, the Manitoba School Board Association said it is concerned about funding.

The 2021 budget allocates close to $3 billion to education and includes the first step to phasing out education property taxes.

The budget commits to $248 million in Education Property Tax Rebates that will be given to about 658,000 properties.

The Manitoba School Board Association said it is fine with a reduction in education property taxes, but that it is worried about how the funding will be made up.

“Where the significant concern comes in is the fact at no point in today’s announcement was there any details provided about where the money will be replaced from,” said Alan Campbell, president of the association.

The Manitoba Teachers’ Society said it has similar concerns, but that its main focus of reducing childhood poverty is being addressed.

“Yes, there a few pages in the budget document that speak to a poverty reduction strategy, that’s great. That is words on the page. We want to see action, we want to see results and we’re going to wait for that,” said Nathan Martindale, vice president of the Manitoba Teachers’ Society.

The province said to offset the education property tax reduction’s impact on school boards, it will be allocating $1.6 billion over four years for education funding, with a $23 million grant to school divisions this year.

Though the province said this is the highest education budget in Manitoba history, post-secondary education took a hit.

The province gave universities advance notice of the cuts, which caused an average 3.75 per cent tuition increase for students at the University of Manitoba.

The province said that this academic year, it is capping university tuition rate increases at 3.75 per cent and at $250 per college program.

This is the fourth year in a row that the government cut operating grants for post-secondary institutions.

– With files from CTV’s Danton Unger.