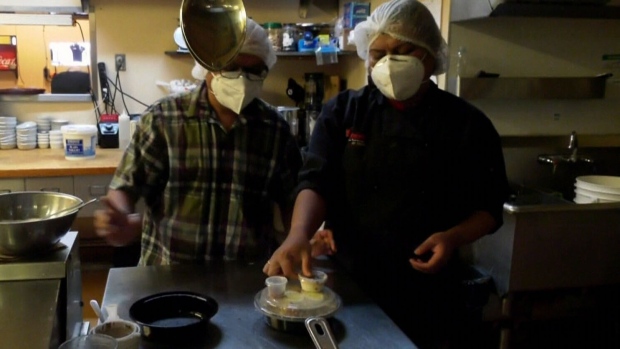 WINNIPEG — A restaurant in Selkirk, Man. has given hundreds of meals to community members struggling during the COVID-19 pandemic.

Owners Veena Nandan and Nandan Satheesh immigrated to Canada in 2016 and knew what they wanted to do when they arrived.

“I have a passion of cooking and back in India, he has always been in the entertainment industry, theatres, bars, and hotels. Everyone knew we wanted to open a restaurant when we moved to Canada,” recalled Nandan.

In 2018, the pair opened Vinnies South Indian in Selkirk.

When the pandemic hit in March of last year, many businesses closed down. Vinnie’s stayed open, but Nandan saw the impact the virus was having on the community and wanted to help.

“Somebody who comes to our home never goes hungry kind of thing, that has been a part of our Indian tradition this whole time, and we are just trying to spread that tradition,” said Nandan.

The restaurant made a Facebook post saying that if anyone needed a hot meal, Vinnies would provide them with one free of charge.

The couple has given out almost 1,000 meals since March of last year, and it’s all arranged privately, so people aren’t identified.

Larry Johnasson, the mayor of Selkirk, said the city has a big heart, and the community has been supporting each other through the pandemic.

“Veena and Nandan have really stepped it up, they’ve opened their restaurant, they’re cooking, and they’re helping out people that are less fortunate, and it’s so impressive to see,” he said.

Nandan said people have started reaching out with donations and offering to volunteer their time to help with deliveries.

She says Vinnies will continue to help the needy into the New Year.

“We really like the spirit of giving back, so we think it will be part of Vinnie’s to give back, and there will always be community charity,” Nandan said.

Along with Selkirk, Nandan said they’ve also provided meals for people in Beausejour, Winnipeg, and Stonewall.