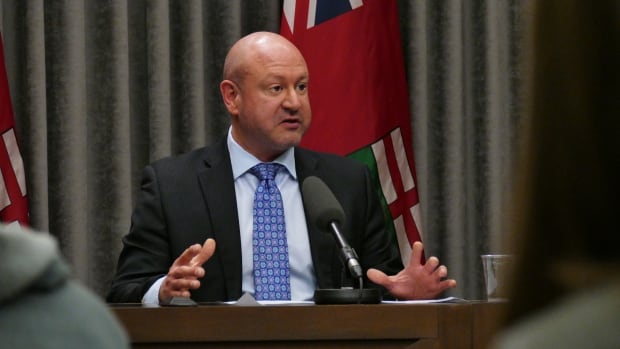 The number of COVID-19 cases in Manitoba surged on Wednesday, when health officials announced 14 new cases of the virus.

That news brought the province’s total of probable and confirmed cases to 35, up from 21 a day earlier.

The update marks the biggest jump in COVID-19 cases since the outbreak began. The previous high was on March 17, when the count nearly doubled from eight to 15.

The latest cases include a woman in her 60s who is in an intensive care unit in critical condition and a girl under the age of 10.

The province’s chief provincial public health officer, Dr. Brent Roussin, said he is aware of one case of COVID-19 in Manitoba that involves a health-care worker. The person was not on the job when they were infectious with the virus.

Most of the new cases appear to be either related to travel or exposure to known cases of COVID-19, Roussin said. Community transmission will be official if Manitoba finds a case not connected to travel or a known case of the virus.

As of Tuesday, there have been about 4,800 tests done at the Cadham Provincial Lab, including 352 on Tuesday, he said.

“The lab is working around the clock to work on their capacity. But testing, again, is only one strategy to this. The social distancing messages are vitally important right now,” Roussin said.

Manitoba’s chief provincial public health officer says it will likely be months, not weeks, before Manitoba gets to the other side of the COVID-19 pandemic. 0:25

Right now, the province doesn’t have the resources to be able to test everyone for COVID-19, so it’s only testing people who have recently travelled internationally or been in close contact with someone who has the virus — and even those people only get tested if they’re showing symptoms.

Roussin said the province has created a list of who will be prioritized once the lab is able to do more tests. Once that happens, he said, the criteria could be opened to test health-care workers, people who live in close quarters (like long-term-care facilities) and eventually anyone in the community who shows symptoms of the virus, regardless of whether they’ve travelled recently.

Still, there are many unanswered questions about how this will unfold, Roussin said — and in the meantime, people should follow the province’s directions on how to slow the virus’s spread.

“It depends on the capacity — how we expand that, and how quickly we can expand that,” he said. “There’s a lot of focus on testing, but testing is not the only answer here. If we have someone in the community right now who’s ill, our advice is to stay home.”

More restrictions could be coming

Eighty per cent of people who contract COVID-19 have mild or moderate symptoms and will recover at home, Roussin said.

Children and young adults are among those who have virus, he said, stressing that no one is immune to it.

He also said he is “absolutely” looking into reducing the size of gatherings allowed in the province from 50 to fewer than that, though no changes have been made at this point.

“That is a consideration that’s constantly being reviewed,” he said.

He also suggested social distancing measures could be in place for months.

“We’re not just simply a couple weeks from the end of this,” Roussin said.

There have been cases of people not disclosing their travel history when seeking medical treatment, he said — something that needs to stop.

No fines have been issued under the Public Health Act yet, he said.

“We already see many, many Manitobans making steps to protect us all.”

Manitoba was bracing for a spike in COVID-19 cases and on Wednesday it arrived. 2:24

Still no signs of community spread

There hasn’t been an increase in emergency room visits for respiratory symptoms in Manitoba, Roussin said — something health officials are watching for as a sign of community transmission.

It’s too early to know what Wednesday’s jump in identified COVID-19 cases will mean in the long run, he added.

“We’ll have to see the trend over time,” he said. “What to make of this particular day, it’s too early to tell.”

Health officials are still expecting more cases in the province, including a small proportion of people who will become seriously ill — but the province has been planning for that and is prepared, said Roussin.

He reiterated the importance of following the province’s recommendations to stay home when you can and to practise social distancing.

“We can interrupt the transmission of this virus if we all pay attention to those social distancing strategies,” he said.

Lanette Siragusa, Manitoba Shared Health’s chief nursing officer, said the wait time for Health Links was down to 23 minutes on Tuesday, and the province’s online screening tool has racked up 276,000 views.

Manitoba Shared Health chief nursing officer Lanette Siragusa says the province is working on a solution to get negative COVID-19 test results back to patients as soon as possible. 0:34

Anyone who gets a busy signal when calling Health Links should keep trying to get through, as this problem is expected to be resolved Wednesday, Siragusa said.

“Just bear with us on that for a little bit longer,” she said.

Everyone who has been tested for COVID-19 in Manitoba should expect to hear back today or tomorrow, and patients will be notified whether they test positive or negative for the virus, Siragusa said.

Health officials have said previously that people who test positive will be notified within 48 hours, but that the province was not yet able to quickly notify everyone who tested negative.

“That is a high priority for us, and we expect a solution soon,” she said.