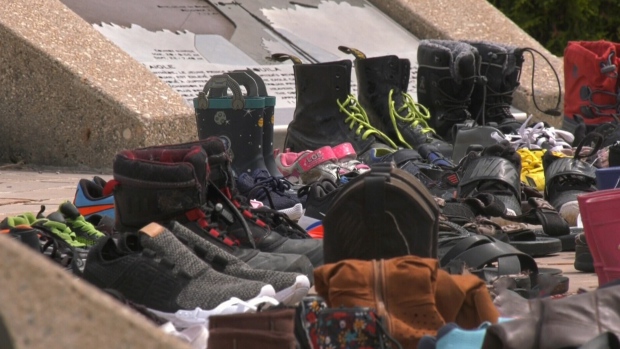 WINNIPEG — The country is in mourning after the graves of 215 Indigenous children were uncovered on the property of a former residential school in Kamloops, B.C.

The provincial and federal flags on the front lawn of the Manitoba Legislative Building have been lowered to half-mast.

A sacred fire is also burning on the front lawn, a place where residential school survivors and others have come to grieve.

“The survivors of 215 children are very important to our communities,” said Alaya McIvor, organizer of the sacred fire. “Their loved ones never got the opportunity to say their last goodbyes or to honour their spirits.”

The former Kamloops residential school was operated by the Catholic Church as far back as 1890. It was one of more than 130 schools in Canada designed to assimilate Indigenous children.

Kids were ripped from their homes, many endured starvation and multiple kinds of abuse.

McIvor said survivors of residential schools are sharing their stories around the fire as they grapple with the news of the buried children.

“They’re hurting deep down. The stories that I’ve heard would make anybody cry,” McIvor said.

Acting Deputy Premier Kelvin Goertzen arranged for the federal and provincial flags to be lowered. He said it’s representative of all Manitobans who are honouring the lives of the 215 children who were buried in Kamloops.

“We need to continue to strive to do better both as a province and a country,” said Goertzen. “It’s an unimaginable loss. I think everybody feels it, either as a parent as I am, but also just as a Canadian.”

The flags at City Hall are also at half-mast, and Saturday, a vigil was held at Oodena Circle at The Forks, where people left behind kids shoes as a tribute.

Chief of Long Plain First Nation and Treaty One Spokesperson Dennis Meeches believes there are more gravesites at other former residential school sites throughout Canada.

“We’re not taught the history of Indigenous people, the true history. I think this will help shed light on what happened at these schools. It’s important for kids to know,” Meeches said.

Meeches said residential schools should be talked about in the Canadian Education system.

McIvor said the sacred fire will continue burning for four days in honour of the children who lost their lives at the Kamloops residential school.

“A lot of communities are hurting. This is just 215 children, there are more to be discovered,” McIvor said.