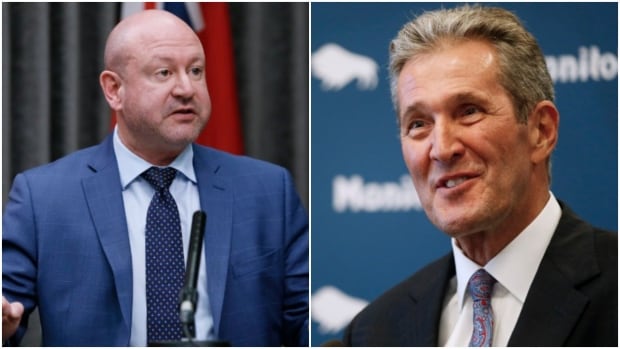 Dr. Brent Roussin will be joined by Premier Brian Pallister at a news conference Tuesday at 11 a.m. CT to announce the updated public health orders, the province said in a Friday news release.

The province’s original goal for this weekend’s Terry Fox Day was seeing 75 per cent of Manitobans 12 and up vaccinated with one dose of a COVID-19 vaccine and 50 per cent with two doses.

Those marks were reached weeks ahead of the target date, and a range of changes to public health orders came into effect July 17.

The Labour Day target calls for 80 per cent of Manitobans to have their first COVID-19 vaccine dose and 75 per cent to have two.

The province has said all services, facilities and businesses will reopen, with limited restrictions in some cases, if that vaccination milestone is met.

As of Friday, 79.5 per cent of eligible Manitobans had at least one dose of a COVID-19 vaccine and 69.3 per cent had two, according to provincial data.

Tuesday will also be the province’s next update on COVID-19 numbers in Manitoba.

The province announced Friday that it will shift to providing twice-weekly COVID-19 bulletins, on Mondays and Thursdays. The province’s online COVID-19 dashboard will be updated on weekdays only going forward.

Due to the Terry Fox Day holiday, there will be no bulletin or web update this Monday.

Pallister’s scheduled appearance at Tuesday’s news conference will be his first time in front of the microphone in more than two weeks, and only his second public appearance following controversial comments on July 7 in which he suggested colonization of Canada was done with good intentions.

The Progressive Conservative minister for Indigenous relations resigned her cabinet post shortly after, and other MLAs in his government have disavowed the comments.

The premier has stood by his comments. Answering reporters’ questions on July 15, he urged people to read what he said “and ask yourself if the remarks are justified.”

Any characterization of the Indian Residential Schools system that denies or marginalizes its intended purpose and impact is historically inaccurate and counterproductive to our journey of reconciliation. Of course our Premier should apologize. <a href=”https://t.co/dWz6DlFLMu”>https://t.co/dWz6DlFLMu</a>

On Friday, Winnipeg Mayor Brian Bowman called on Pallister to apologize, saying in a tweet that the premier’s comments were “historically inaccurate and counterproductive to our journey of reconciliation.”

Meanwhile, Canada’s public health officials are warning that Canada could be seeing the beginning of a fourth COVID-19 wave, driven by the more infectious delta variant of the coronavirus that causes the illness.

“I think we are in a slightly precarious period at the moment, in between these people trying to get the vaccines in and reopening,” federal Chief Public Health Officer Dr. Theresa Tam said on Friday.

“As soon as that balance is tipped, and it wouldn’t take very much with a highly transmissible virus, you’re going to see an uptick in cases.”

The Public Health Agency of Canada released data Friday that suggests fully vaccinated Canadians have accounted for less than one per cent of new COVID-19 cases and hospitalizations since December.

To date, 81 per cent of eligible Canadians have received one dose and 66 per cent are fully vaccinated.

Some demographics have lower vaccine uptake, though, which is driving the transmission of the delta variant, Tam says.