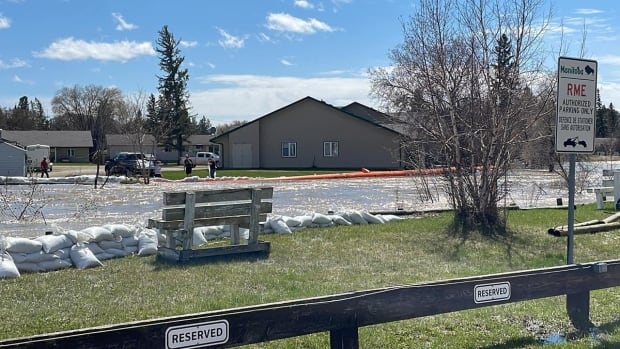 Flooding around the southwestern Manitoba town of Minnedosa with rain in the forecast has local officials considering declaring a state of emergency.

People with homes in low-lying areas are being warned they may need to leave.

The town, which is about 200 kilometres west of Winnipeg, put out a call for volunteers to help sandbag along the Little Saskatchewan River.

Volunteers are needed to help load, unload, haul and stack an additional 30,000 sandbags to protect homes and other buildings and infrastructure.

Environment Canada is forecasting rain beginning as early as Tuesday and continuing until Friday.

Minnedosa officials say crews are working around the clock to pump water while managing the stormwater and sewer system, and they ask residents to limit use of showers, washing machines and dishwashers to minimize the possibility of sewer backup.

The town has requested more support from the provincial government, and an emergency manager and engineer were expected to arrive Tuesday morning. Officials have also requested 2,000 super sandbags, 40,000 small sandbags and additional pumps.

The provincial government is monitoring a weather system that could bring 20 to 50 millimetres of rain to southern Manitoba over the next five days.

On Monday, the province issued an overland flood warning for the Parkland region as a result of recent rainfall combined with snowmelt from higher elevations.