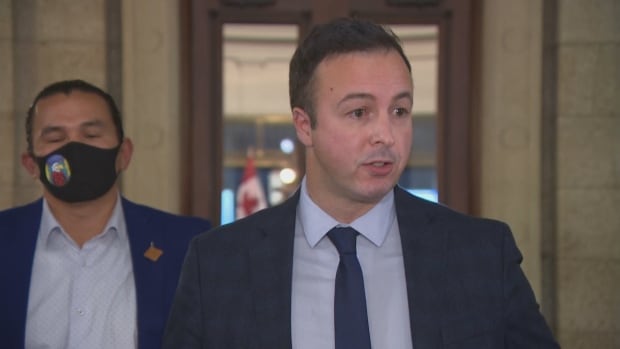 A Manitoba MLA says he’s feeling validated after his complaint the government was trying to silence him was upheld by the Speaker.

Adrien Sala raised a matter of privilege — a formal complaint in the legislature — last December. He alleged the province was attempting to stop his line of questioning by investigating him for breaching the province’s respectful workplace policy.

The government said Sala crossed the line by accusing then-Treasury Board Secretary Paul Beauregard of preventing Manitoba Hydro International from bidding on a contract to provide networking services. The province said non-elected officials should not have their reputations dragged for false accusations.

In a ruling Thursday, Speaker Myrna Driedger said it was within Sala’s right to name Beauregard in the legislative chamber and question his role.

The NDP MLA for St. James told reporters he’s pleased his matter of privilege was supported.

“This ruling validates what we’ve been saying all along here, which is that this government has ultimately abused the [respectful workplace policy] that was designed to protect vulnerable people and they’ve abused it for the purposes of shutting us down from asking questions as the opposition.”

Sala is protected in the chamber by parliamentary privilege, which defends elected officials from legal consequences when raising issues.

Though he was found to have violated the respectful workplace policy, Driedger said that decision does not supercede an elected official’s right to ask questions in the chamber.

“I think it’s now well-disclosed and determined that the public servant was found to have been harassed,” he said, referring to Beauregard.

“The victim has become accused as being something other than the victim and that has to send a bit of a chill through the public service.”

Beauregard, a former MTS executive, was accused by the NDP of not letting other companies compete for the contract extension awarded to Bell MTS. The Official Opposition said they obtained documents through freedom of information which they said showed Beauregard’s interference.

Manitoba Civil Service Commissioner Charlene Paquin said, in a letter written to Beauregard and provided to media, she believed his involvement was limited to simply communicating a decision of government to Manitoba Hydro, not interference.

Despite her decision, Driedger cautioned all MLAs to be cautious in the chamber of naming and blaming people who are not elected officials.

“You have the immense privilege of freedom of speech here,” Driedger said. “I advise you all to be certain that you are using that privilege wisely.”

Beauregard resigned from his role as treasury board secretary in January. He is now employed by government as a technical officer at the deputy minister level.