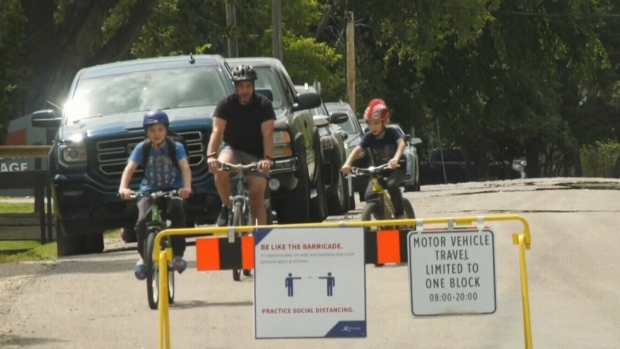 WINNIPEG — Starting Monday next week, cyclists might once again have some roads all to themselves.

City council is mulling over the Open Streets concept and if it should come back for a second year.

The project would see traffic limited to one block on certain roads.

But unlike last year when pedestrians and cyclists shared the widened roads, the current plan would only allow people in bikes.

A report from the province says pedestrians are not allowed on the road where a sidewalk is present.

“Walking on the street is wonderful and it should be allowed because right now because of the restrictions we can’t go anywhere,” said Gabriela Aguero, who enjoys jogging along Wolseley Avenue.

“Some people don’t own bikes and the sidewalks are so narrow, we cannot keep the distance on the sidewalk.”

The report recommends the city reach out to the province to change the law.

“That is the law right now of the province. I think that we as a council and residents respect the legislation,” said Mayor Brian Bowman.

Despite the law, Infrastructure Minister Ron Schuler said no legal changes would be needed and the city can just section off the street to separate vehicles from pedestrians and cyclists.

“The City of Winnipeg is allowed to do anything they want to do as long as they do it safely,” said Schuler.

Aguero said no matter what happens, she will be using the street.

“What option do we have? I don’t want to run close to a mom who is carrying a baby in a carrier because I can’t run with a mask,” she said.