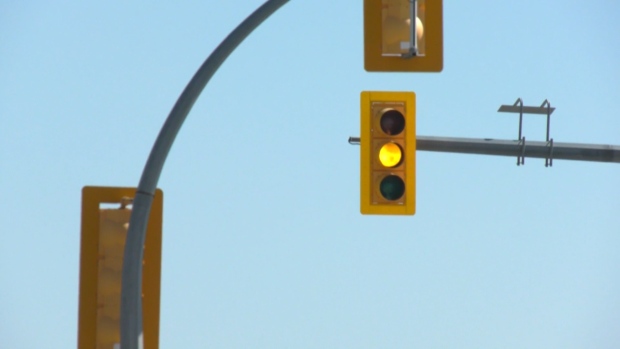 WINNIPEG — An increase in amber light timing may be a factor in a significant reduction in red light tickets at two Winnipeg intersections, according to a city councillor who heads up the city’s infrastructure and public works committee.

From October through to December 2020, red light tickets at Bishop Grandin Boulevard and River Road dropped compared to the same timeframe in 2019 from 357 to 50 tickets.

At Lagimodiere and Grassie Boulevard, the number of tickets plunged from 280 to 44.

“It looks to be that tickets are dropping,” said Coun. Matt Allard (St. Boniface). “Certainly, I think the indication is there that this change of policy has worked.”

Prone to collisions and high rates of photo enforcement, the intersection of Bishop Grandin and River Road has long been a source of concern and frustration for some Winnipeg drivers.

“Beyond the tickets, what the issue has always been — it’s two issues, it’s unfair to motorists but it’s as equally dangerous as it is unfair.”

This past September, the City of Winnipeg adjusted amber light timing at 110 intersections on high-speed routes with speed limits of 70 or 80 kilometres per hour.

The city’s Traffic Signals Branch adjusted amber lights from a uniform length of four seconds to 4.3 seconds in 70 kilometres per hour zones and 4.7 seconds in 80 km/hour zones.

“That seven-tenths of a second exposed and reflects in the data what we’re saying,” said Dube.

Allard previously moved a motion for the public service to look into the issue.

He said the stats seem to suggest better compliance from drivers.

“I think there has definitely been a reduction what’s over and above what you might’ve expected from the COVID impact,” said Allard.

The City of Winnipeg though sees the reduction in traffic volumes from the pandemic as the primary factor.

The drop-off in tickets happened as officials moved the province into a partial lockdown and the city said traffic volumes are currently running at 80 per cent of pre-pandemic times.

“The adjustment to the amber light times would likely have had only a small effect in terms of enforcement,” a city spokesperson told CTV News Winnipeg. “A before and after study would need to be conducted at the specific intersections where the timing was adjusted, in order to know the effect at each individual intersection.”

Photo radar isn’t at all intersections, so Allard said he’ll be seeking more information about how the change has affected driver behaviour and enforcement.

Dube argues the city should raise amber light timing even further to 5.4 seconds in 80 km/hour zones.

“They quietly raised it by seven-tenths of a second, which is only half of what they should’ve raised it to,” he said.

No changes have been made to amber lights on roadways with speed limits of 60 kilometres or lower.

Amber light timing has stayed at four seconds in those areas.