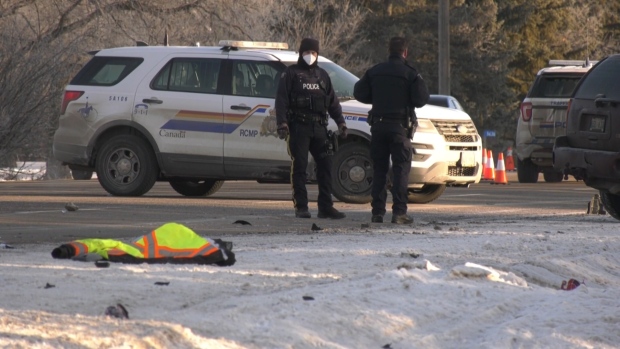 WINNIPEG — A St. Andrews man is dead after being hit by an SUV while walking along the highway.

A Criminal Collision Investigation Team, along with Selkirk RCMP and a Forensic Collision Reconstructionist are investigating a crash that shut down parts of Highway 9 near Donald Road on Tuesday morning.

Mounties said the crash happened around 8:20 a.m. when a vehicle going north along Highway 9 collided with a 68-year-old man who was walking on the road.

The man, who is from St. Andrews, was taken to hospital where he died of his injuries.

Emergency crews were on the scene of the crash Tuesday morning. A fire truck and two police cruisers had blocked off the northbound lane in the area, and an SUV sat on the side of the road with damage to its front end.

CTV News spotted police looking at a running shoe in the debris – a short distance from other clothing on the ground.

RCMP said the driver of the vehicle, a 47-year-old from St. Andrews, was not injured. Mounties said alcohol and drugs are not factors in the crash.

The crash happened about 25 kilometres north of Winnipeg.