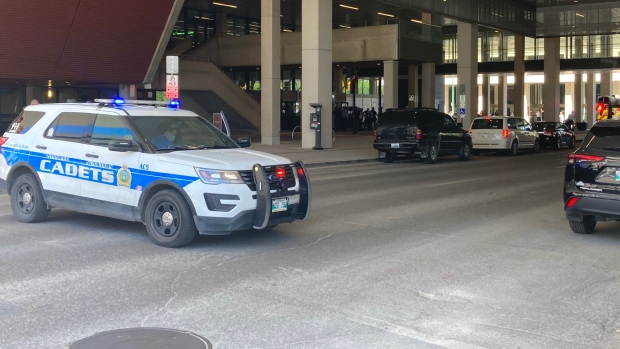 WINNIPEG — One of Winnipeg’s COVID-19 vaccination supersites has reopened after a possible gas leak prompted evacuations.

Just before 2 p.m. on Monday, Winnipeg police said the RBC Convention Centre was being evacuated as a precaution, and warned people to avoid the area. The site was cleared to reopen around 3:30 p.m.

At the time, Manitoba Hydro tweeted that it was investigating reports of a natural gas smell. It said no leak has been found at this time.

The province said in a news release the convention centre would be closed for roughly two hours while Hydro and the Winnipeg Fire Paramedic Service deal with the problem. It asked people who had scheduled appointments during this time not to come to the supersite.

It said anyone with a COVID-19 vaccine appointment at 4 p.m. or later is allowed to attend their appointment as scheduled.

The province said it will follow up with the people whose appointments were affected if they have their contact information about rescheduling.

In a tweet, the Manitoba government said approximately 1,300 appointments were impacted by the temporary closure. If your appointment was impacted, the province is asking people to reschedule by calling 1-844-626-8222 or book an appointment online.

“New appointment times will be added to the booking system tomorrow morning so that those requiring new appointments can re-book as soon as possible,” the province said.