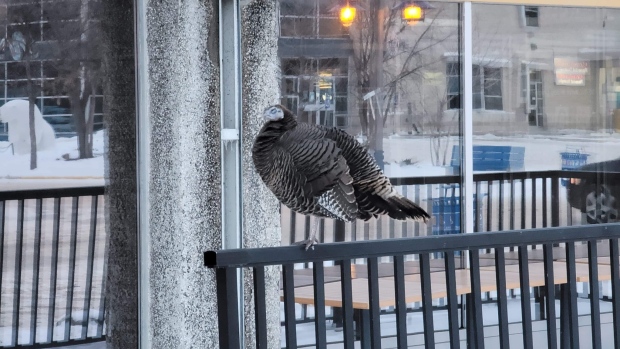 WINNIPEG — The town of Gimli, Man. has a feathered celebrity roaming the town.

A wild turkey has decided to call the town located on the west side of Lake Winnipeg home.

Brittany Isfeld, a Gimli native, manages a Facebook group for residents and is at the forefront of the turkey trend.

“This turkey has just turned the town crazy,” she said. “They are really passionate about it.”

Isfeld said she decided to make a post about naming the turkey, only to find out it was already well established in the town.

“I decided for fun to start a contest to name it because I heard Gimli Gobbler and thought it could use a better name,” said Isfeld. “Pictures and comments came flooding in saying it was named Gertie.”

According to Isfeld, Gertie roams the downtown area of Gimli, visiting various storefronts on its way.

No one knows where the turkey originally came from but it was first seen on the outskirts of town before it moved downtown.

Gertie, now internet famous, has brought some cheer to the town during tough times.

Worrying that the town’s centre is not a good place for a turkey to live, some Gimli residents are looking for a refuge for Gertie to stay long-term.

-With files from CTV’s Michael D’Alimonte