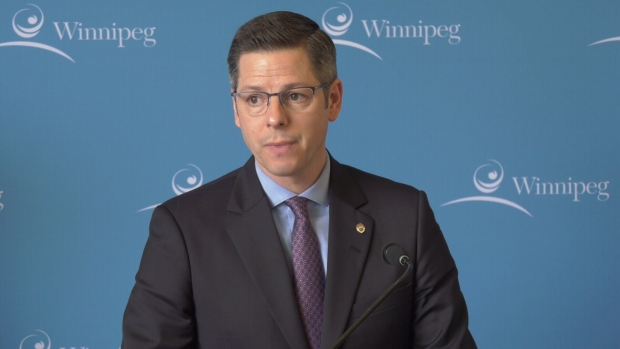 WINNIPEG — Winnipeg’s mayor is calling on the province to increase the fines for disobeying public health orders.

At a news conference Thursday, Brian Bowman said he wants the province to do a more effective job.

“I’m hearing a lot of concern from residents about the lack of enforcement of provincial public health orders in our community, and I want Winnipeggers to know I share your concern,” said Bowman.

He wants the province to significantly increase the fines, increase the visibility of the orders themselves, and those conducting provincial enforcement.

“The visibility, in particular, would go a long way towards discouraging violations of the provincial public health orders, and also demonstrating respect for all of those law-abiding citizens who are doing their absolute best to comply with the public health orders that are evolving over the last year.”

Current fines range from $298 for not wearing a mask in a public place to $1,296 for individuals failing to comply with emergency orders and $5,000 for corporations disobeying the rules.

“If people are flying into our community to hold rallies at The Forks, they can afford it, and they should be fined significantly. I don’t think they’re high enough, and I don’t think enough people are getting the message,” said Bowman.

“I would start by looking at, at a minimum, doubling if not tripling those fines. Make them significant and send that message for those that are choosing willing to just violate provincial public health orders that there’s going to be significant consequences.”

On Tuesday, the province said 26 tickets were handed out over the last week to people attending anti-restriction rallies, including 20 at The Forks on April 25.

There are more than 3,300 people across various agencies, including RCMP, provincial employees, and municipal partners, who can enforce public health orders. Bowman noted the city currently has five bylaw officers lending support.

Bowman said he also wants there to be more visibility of these officials so people can be reminded of the orders, and they can act as a deterrent.

“I’m not trying to prescribe the visibility of law enforcement. It’s important that elected officials respect the fact that the operations of police services and RCMP are that of those services,” said Bowman.

“There are other individuals in the more than 3,000 person strong enforcement team that we’ve heard from provincial officials that could be more visible, and obviously making sure that their safety is paramount, as well.”

The province has previously said enforcement officers will be present at any rallies, large gatherings, and events planned.

Bowman said he wants the consequences of disobeying orders to be better communicated to Manitobans by all levels of government. He said stronger measures are more important than ever given the test positivity rate is now more than 10 per cent in Winnipeg.

“The time has come for more proactive measures. That time came and went a long time ago.”

CTV News has reached out to the Manitoba Government for comment.