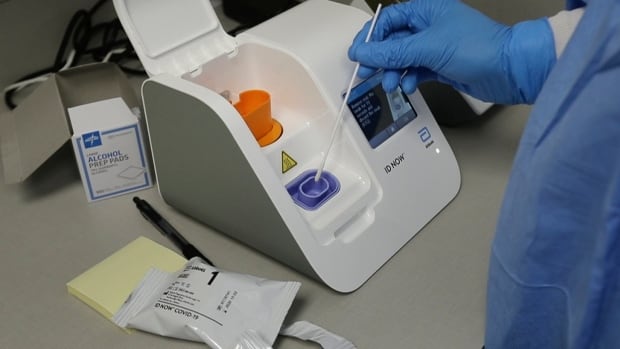 A new Winnipeg testing site for first responders is collaborating with provincial scientists to gather data on the accuracy of a recently-approved rapid test for COVID-19.

“We’re excited that this has gone through its first week,” said Jay Shaw, assistant chief of emergency management for the City of Winnipeg, on Wednesday.

“It’s a really good program and it’s going to make a difference.”

The city opened its dedicated first-responder testing site at the Winnipeg Fire Paramedic Service academy on Nov. 20. The site is staffed by licensed paramedics who aren’t working in the field, and completed 93 COVID-19 tests on municipal and provincial first responders in its first week.

In addition to traditional nasopharyngeal swab tests, people who get tested at the site will be given a test using the Abbott Laboratories ID NOW rapid response testing device. The rapid test was approved by Health Canada in September.

People will receive results based on the traditional test, Shaw said. But results from the rapid test will be compared to the traditional ones, to help scientists at Cadham Provincial Laboratory determine its accuracy as part of a validity study.

Shaw said nearly everyone tested at that site will receive both tests, unless they aren’t eligible for the rapid test based on certain eligibility criteria.

“The validity of that test is very strong in terms of the positive result, but not so much on the negative, and that’s why we’re working with the province of Manitoba to do some studying,” Shaw said.

The testing device is a “great machine, has a lot of great purposes for the right use,” he said.

Like many other departments, the Winnipeg Fire Paramedic Service has seen increased absenteeism and overtime since the pandemic started, officials said Tuesday.

“That’s one of the reasons why we initiated dialogue with federal and provincial officials about the first-responder testing site,” Mayor Brian Bowman said at the news conference.

The city also proposed an extra $250,000 for counselling and other supports to first responders in its preliminary 2021 budget update Wednesday.

The additional funding, if approved, would go toward helping front-line members of the Winnipeg Fire Paramedic Service cope with the added trauma and stress of the pandemic.

“The stress of working in the WFPS goes beyond battling fires and attending medical calls. Seriously distressing issues like abuse, car accidents and suicides take an emotional toll, causing trauma and real injury to our members.”

The proposal comes in addition to other suggested funding that would see the WFPS operating budget increase by six per cent over three years, rising from $204.3 million in 2020 to $216.9 million in 2023.