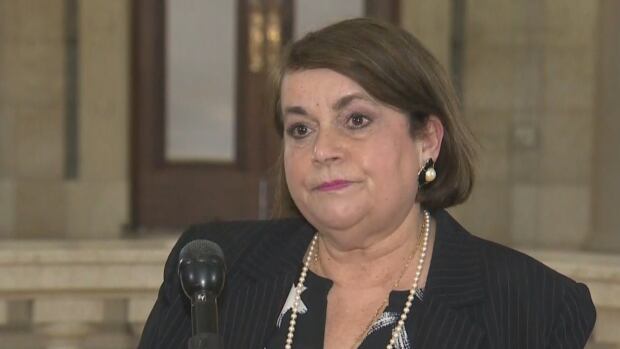 Fifty-six residents died in the outbreak at Maples, which was declared Oct. 20 and lasted nearly three months.

Eddie Calisto-Tavares, an advocate whose father was among the 56 victims, announced Wednesday she will be forming a volunteer task force to hold the province accountable for the outbreak, and called for a public inquiry into Maples.

“No one lost their jobs. No one got fired,” Calisto-Tavares told reporters at the Manitoba legislature.

“I will hold this government accountable. There was a breach of trust in so many levels, and I am going to hold Revera and the Maples accountable through a volunteer task force.”

Revera is the for-profit company that runs the care home.

Six of Stevenson’s recommendations are specifically for Maples care home, including revising its outbreak plan to ensure it can be put into action and ensuring the facility is staffed appropriately during any outbreak.

Stevenson also recommended that the provincial health ministry mandate and fund a provincewide health care response for pandemic outbreaks, in order to reduce fragmentation and delays in the outbreak response.

Calisto-Tavares’ task force will be made up of people who lost family members at the Maples, who either have nursing backgrounds or witnessed the conditions of the care home, she said.

The task force will push for the implementation of Stevenson’s 17 recommendations, and advocate for the improvement of seniors’ care generally.

During question period Wednesday, Manitoba Health Minister Heather Stefanson said the province has committed to implementing the 17 recommendations made in Stevenson’s review, and that an implementation plan will be released shortly.

“We have reviewed the recommendations in Dr. Stevenson’s report. That is not just Maples it responds to — it will be changes that will be made across Manitoba and all personal care homes,” said Stefanson.

“We will be coming out with that implementation plan very soon.”

Uzoma Asagwara, health critic for the Opposition NDP, asked Stefanson during question period if she would revoke the licences for Maples and Parkview Place — another Revera-owned facility that had a significant COVID-19 outbreak that killed 29 residents.

Stefanson rejected the suggestion, saying “it would be dangerous to take an ideological approach to this situation.”

Instead, her ministry plans on working with health-care professionals to improve the system and health-care delivery, she said.